2011 a journey had begun. Ever since watching the Hollywood classic The Bodyguard, when I was 11, I wanted to be Frank Farmer. You film geeks will know who I mean. The guy was a legend. Throwing knifes about like it was easy. Jumping into the call of duty without any care for his wellbeing. That was going to be me (although only now knowing some of what you see on there is far from what really happens)

Anyway, November 2011, I had acquired my close protection license. I began a journey, one I will never forget. I met some people along the journey over those years, who will remain life long friends, some closer than others, none the less, some top blokes and girls. Fast forward 2012, I started working at the Weymouth Olympic village and soon acquired a power boat licence and got out on the boats. What a pleasure. You’re there, captain of the boat along with a G4S security bloke and he’d point in a direction suggesting he’d seen something; yeah, right! The blagger just wanted me to put the throttle down! Well, as any good captain would do, he’d trust his crew and off we’d go. Throttle down. Bouncing along the waves for 10–15 seconds until we got to a position and realise it was nothing. Did we complain? Nahhhh we smile and went to do it all again. 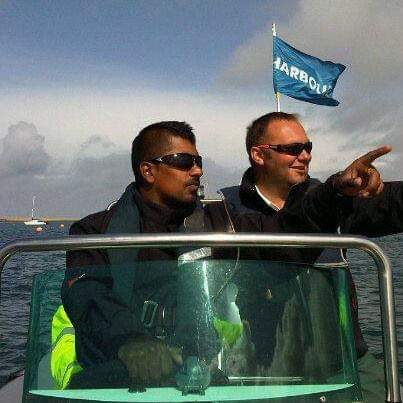 We had a lot fun during those times.

For me personally it was a time of growth. Although I didn’t notice it at that time, 2011-2014 was make or break for me. 2012 in particular was vital. Meeting new people’s from different walks of life. Moving away from home for the first time and away from my mum. I embraced it. As scared as I was, I was also that little bit more excited to explore and also I knew I had it in me. I wanted to be away. I wanted to be comfortable. In all honestly, I wanted some inner peace. I didn’t want to be around my surroundings. I didn’t want to watch my mum go through illness. It was painful. Leaving her was also painful but I knew I needed to do this. I left my day job working for a lift firm. It was all just too comfortable. I wasn’t growing. I had more in me. I Left!

Although this leg of the journey only lasted 3 months, they were the best 3 months of my life to date. During the latter part of this leg, I was close to deploying on a new contract which would’ve been life changing. Little did I know one phone call would’ve also been life changing. My brother had been taken ill and was in intensive care with his liver about to fail.

I remember that evening / morning very well. I was staying in Weymouth at that time having moved there from Bournemouth. I went for a few drinks with some pals from the Olympic village. It was a brilliant night. I knew a few days earlier my brother was not at his best but I was told it’s nothing to worry about and not to come back to Leicester. Anyway so I had a good night and got back to my room at the Riviera at about 12am. I put my phone on silent every night…I’m a light sleeper.

Next morning, I woke up and I had 30+ missed calls…from family members who wouldn’t typically call me. I was surprised but also expecting the worse. I made a call and my life had changed; my brother was about to die. I kept asking “will he live?” Nobody could give me a straight answer; nobody was confident of his survival chances.

Within 30 minutes I was out. In my car. Boot, back seat and front seat full of my clothing and everything I owned that I had with me. I knew I wasn’t coming back. I knew my life will never be the same again.

Food prep for the mind